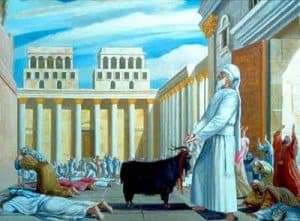 In the Parshah of Vayikra, which opens the book of Leviticus, G-d speaks to Moses from the Tent of Meeting and begins His communication of the laws governing the bringing of the korbanot, the animal and meal offerings that are the central feature of the service performed in the Sanctuary.

“And He called to Moses; and G-d spoke to him out of the Tent of Meeting, saying:
Speak to the children of Israel, and say to them: A man who shall bring near of you an offering to G-d; of the cattle, of the herd and of the flock, shall you bring near your offering…”

The first korban to be described is the olah, the “ascending” offering (commonly referred to as the “burnt offering”), whose distinguishing feature is that it is raised to G-d, in its entirety, by the fire atop the Altar.

If his offering be an Ascending Offering of the herd, let him offer a male without blemish; to the entrance of the Tent of Meeting shall he bring it near, that he may be accepted in goodwill before G-d.

And he shall lean his hand upon the head of the offering; and it shall be accepted for him to make atonement for him.
And he shall slaughter the bullock before G-d; and the priests, Aaron’s sons, shall bring near the blood, and sprinkle the blood round about upon the Altar that is by the entrance of the Tent of Meeting.

And he shall skin the offering, and cut it into its pieces
And the sons of Aaron the priest shall put fire upon the Altar, and arrange the wood upon the fire. And the priests, Aaron’s sons, shall arrange the parts, the head, and the fat upon the wood that is on the fire which is upon the Altar. Its inwards and its legs shall he wash in water.

And the priest shall burn all on the Altar, an ascending offering, a fire-offering of a sweet savor to G-d.
The olah can also be a male sheep or goat, in which case the same procedure is followed.

A turtledove or young pigeon can also be brought as an “ascending offering.” Instead of being slaughtered through shechitah (cutting of the throat), the bird is killed by melikah–nipping off the head from the back of the neck. The blood is applied to the wall of the Altar, and the bird’s crop and its adjoining feathers are removed and discarded; then the bird’s body is burned upon the Altar.
Meal Offerings

And a soul who shall offer a meal offering to G-d…
Meal offerings, called menachot (“gifts”), are prepared of fine flour, with olive oil and frankincense. The priest removes a kometz (“handful”–actually the amount grasped by his three middle fingers), to be burned on the Altar; the remainder is eaten by the priests.

There are five types of donated meal offerings:
1) the standard “meal offering” whose kometz is removed before it is baked;
2) the “baked meal offering,” which came in two forms: loaves or
3) flat matzot;
4) the “pan-fried” meal offering;
5) the minchat marcheshet, deep-fried in a pot.

The following rule applies to all the meal offerings (including the “loaves”):
No meal offering, which you shall bring to G-d, shall be made leavened; for you shall burn no leaven, nor any honey, in any offering of G-d made by fire…
Another rule is that,
Your every meal offering shall you season with salt; never shall you suspend the salt covenant of your G-d.

This latter rule applies to all korbanot: “With all your offerings you shall offer salt.”
Another meal offering mentioned here is the minchat bikkurim (also called the “omer”) brought on the second day of Passover from the year’s very first barley harvest. In this minchah, the kernels are roasted by fire before they are ground into flour.
(In addition, a meal offering accompanied all animal offerings.)
The Peace Offering

The shelamim, or “peace offering,” could be either male or female, and either from “the herd” (i.e., an ox or a cow), a sheep or a goat.
Like the olah, its blood was sprinkled upon the Altar; but unlike the olah, which “ascended” in its entirety upon the Altar, the meat of the shelamim was eaten by the “owner”–the one who brought the offering (two portions of the animal, the breast and the right thigh, were eaten by the priests). Only certain parts of the animal were burned on the fire atop the Altar:

Because they are offered to G-d on the Altar, these specified veins of fat, which the Torah calls cheilev, are forbidden for consumption in all animals: “It shall be a perpetual statute for your generations throughout all your habitations: all cheilev and all blood, you shall not eat.”
The Sin Offerings

The korbanot discussed up to this point are “donations”–offerings pledged out of a desire to give to G-d. Now the Torah moves on to discuss obligatory offerings, such as the chatat, the “sin-offering” brought to atone for an inadvertent transgression of the divine will.
And G-d spoke to Moses, saying:
… If a soul shall sin through ignorance against any of the commandments of G-d, and shall do one of the things that must not be done…
Different offerings are prescribed depending on the stature of the transgressor.
If the anointed priest does sin to the guilt of the people, he shall bring… a young bullock without blemish to G-d.

A similar offering is also brought in the case that the entire community commits a transgression as a result of an erroneous ruling by the Sanhedrin (High Court).
If the entire congregation of Israel shall sin through ignorance, and the thing be hid from the eyes of the community, and they have done something against any of the commandments of G-d concerning things which should not be done…

it had to be offered by the High Priest; its blood was sprinkled “indoors”–inside the Sanctuary on the Golden Altar and opposite the Parochet; after the chalabim were burned on the Altar, the rest of the animal was not eaten by the priests (as was the case with ordinary sin-offerings) but rather “the skin of the bullock, and all its flesh, with its head, its legs, its inwards and its dung, even the whole bullock shall he carry forth outside the camp to a clean place… and burn it on the wood with fire.”

A nassi (king) who commits an inadvertent transgression brings an offering similar to the standard sin-offering, except that it must be a male goat.
Anyone else who sins inadvertently, brings
a kid of the goats… [or] a lamb… a female without blemish.

And he shall lean his hand upon the head of the sin offering, and slaughter it for a sin offering in the place where they slaughter the burnt offering.

With certain transgressions (such as failure to fulfill an oath to bear witness, or entering the Sanctuary in a state of ritual impurity), the sin-offering brought depended on the financial ability of the transgressor. One who could not afford a female sheep or goat, brought two turtledoves or two young pigeons–one bird to be brought as an “ascending offering” and the second bird as a sin offering. A person of even lesser means, who could not even afford two birds, brought a meal offering, on which “he shall put no oil upon it, neither shall he put any frankincense upon it, for it is a sin offering.”

Guilt Offerings
For certain transgressions, the offering brought in atonement is not a “sin offering” but an asham (“guilt offering”). An asham is distinguished from the standard sin offering in that it was a male sheep, and that it had to be worth at least “two shekels of silver of the shekel of the Sanctuary.”

Three types of asham are described in our Parshah. The first is brought by one who unintentionally made unauthorized use of property belonging to the Sanctuary–a crime called me’illah (“betrayal”). He must pay back what he had expropriated and add to that an additional one-fifth of its value, and also bring an asham to obtain atonement for his unintentional trespass.

A second type of “guilt offering” is the asham talu, brought by one who thinks he may have unwittingly committed a transgression, but is not sure (for example, he had two pieces of meat before him and ate one of them; later, he discovers that one of them was cheilev–forbidden fat–a trespass which would obligate him to bring a sin offering if he would know with certainty that he committed it).

The third and last asham of our Parshah is the one brought in atonement by one who swears falsely in the process of defrauding his fellow man:

If a person sin, and commit a betrayal against G-d, and lie to his fellow regarding that which was delivered him to keep, or in a loan, or in a thing taken away by violence, or withholding payment; or he found a lost object and has lied concerning it; if he swears falsely in any of all these that a man does, sinning in that…

He shall restore it in the principal, and shall add the fifth part more to it, and give it to him to whom it belongs, in the day of his [atonement of his] guilt.
And he shall bring his guilt offering to G-d, a ram without blemish out of the flock, according to the value of a guilt offering, to the priest.
And the priest shall make atonement for him before G-d: and it shall be forgiven him for anything of all that he has done wherein to incur guilt.
(By Chanad)