“And it came to pass on the eighth day…”
This week’s reading, Shemini (“eighth”), begins by recounting the events of the eighth day–which was the 1st of Nissan of the year 2449 from Creation (1312 bce), two weeks before the first anniversary of the Exodus.

And it came to pass on the eighth day, that Moses called Aaron and his sons, and the elders of Israel.
And he said to Aaron: “Take you a young calf for a sin offering, and a ram for an ascent offering, without blemish, and offer them before G-d.
“And to the children of Israel you shall speak, saying: Take a kid of the goats for a sin offering; and a calf and a lamb, both of the first year, without blemish, for a burnt offering; also a bullock and a ram for peace offerings, to sacrifice before G-d; and a meal offering mingled with oil;
“For today G-d will appear to you…” 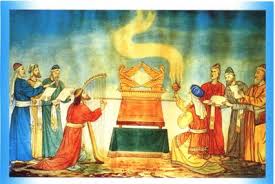 The offerings are brought as instructed, following which,
Moses and Aaron went into the Tent of Meeting, and came out, and blessed the people: and the glory of G-d appeared to all the people.
And there came a fire out from before G-d, and consumed the ascent offering and the fat [of the other offerings] upon the Altar. And all the people saw, and sang out, and fell on their faces.