27/Jul Parasha of The Week 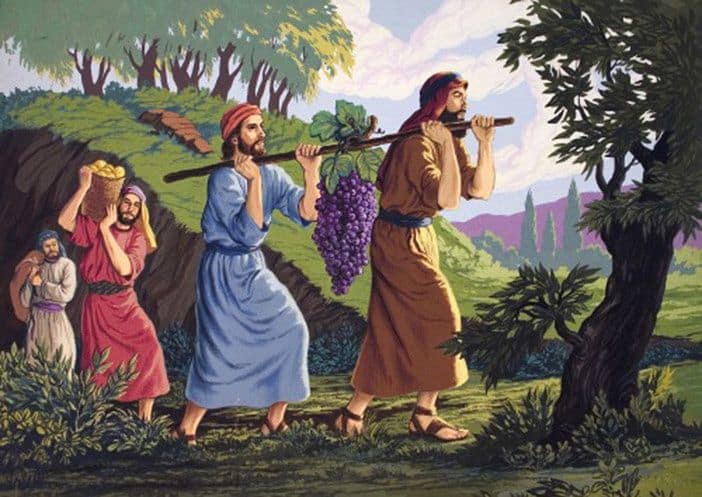 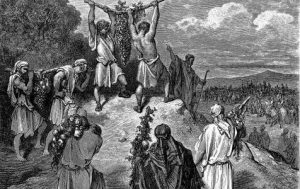 In Parashah Shelach Moses sends twelve spies to the Land of Canaan. Forty days later they return, carrying a huge cluster of grapes, a pomegranate and a fig, to report on a lush and bountiful land. But ten of the spies warn that the inhabitants of the land are giants and warriors “more powerful than we”; only Caleb and Joshua insist that the land can be conquered, as G d has commanded.

The people weep that they had rather return to Egypt. G-d decrees that Israels entry into the Land shall be delayed forty years, during which time that entire generation will die out in the desert. A group of remorseful Jews storm the mountain on the border of Land, and are routed by the Amalekites and Canaanites.
The laws of the menachot (meal, wine and oil offerings) are given, as well as the mitzvah to consecrate a portion of the dough (challah) to G-d when making bread. A man violates the Shabbat by gathering sticks, and is put to death. G d instructs to place fringes (tzitzit) on the four corners of our garments, so that we should remember to fulfill the mitzvot (divine commandments).
There are often times in our lives where fear gets confused with mistrust and doubt. In order to succeed we know it is only possible if we have faith that others will do their part as well. Too often, we project self-doubt on to others and make them the problem. We do not realize the problem is our own.

To us, this is the simplest way to understand what happens in this week’s parsha. G-d tells Moses to send out the spies to survey the land. Moses assumes that the leaders of each tribe should be chosen as the representatives and Moses gives a detailed description of how the spies should proceed. It is clear from the parsha that Moses truly asks for a survey of the land and its inhabitants. He does not ask them for an assessment of whether they are capable of conquering the land. That fact is not in question-G-d has already made His promise. The only question remaining is how this is going to happen.

The spies return and do give a detailed description of what awaits them in Canaan and they volunteer an unwelcome opinion that conquering the land seems impossible. They even “slander” the land that the Lord has given them.

The Midrash tells us that Moses was aware that things may turn out this way, and they learn it from a strange verse in the text. After the Torah lists the names of the spies and their home tribe, a verse is added which states, “And Moses called Hosea Bin Nun, Joshua.”

The Midrash says that Moses changes Hosea’s name to Joshua, which means, “he will bring salvation” because he sees that there is a big mistake in the offing and he anoints Joshua as the one who will provide the leadership to extricate the people from the inevitable mess.

According to this understanding, Moses suspects that the people are not ready. He may even suspect, or fear, that he is not ready to lead them in the next stage of their liberation. Neither Moses nor the people have enough faith in each other. Neither assumes that the other can hold up his end. Of course, neither of them understands that their lack of faith in the other implies a lack of faith in G-d. G-d has determined that it is necessary to survey the land. God has decided that the land will be conquered by natural means. G-d is the one who requires cooperation among the people in order for this to happen.

Moses and the people seem to fail the test, only to have a new leader emerge-Joshua, the one Moses, himself has chosen. For maybe Moses sees that Joshua and not Moses is more suited to the next task.
The Midrash says, if you cannot have faith in each other to determine your destiny, I, the Lord, will let you determine your destiny alone with Me. Each year you will dig your graves and I will decide whether to complete what you have begun. To trust in the Holy One is to also have faith in the ability of others to carry out the Holy One’s designs, for without partners, we will fall into the abyss of doubting others, doubting ourselves and doubting the Holy One as well. Working together means entrusting each other with the ability to make projects succeed or fail. Such a trust is fragile, especially when it has been abused in the past, but without the ability to trust we will always remain in the desert.
by Rabbi Avi Weinstein

27/Jul Parasha of The Week