The Hamsa Hand Meaning – The Hand of God 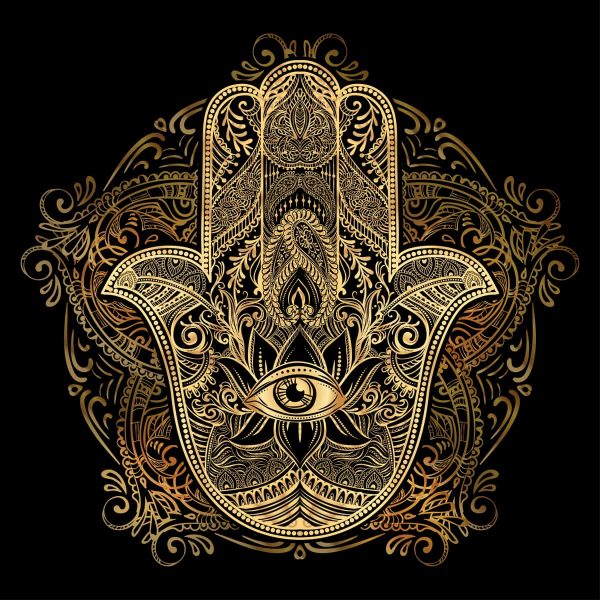 In Israel, the hamsa hand is as prominent as the Star of David. It’s on necklaces, keychains, bracelets, and even walls. The hamsa hand pendant is worn far and wide in Israel. However, what is a hamsa hand? We are going to go over the origins of this symbol, as well as its meaning today.

What Is a Hamsa Hand?

The hamsa hand is a symbol consisting of an eye that is placed within the palm of an opened hand. It has usually designed to be symmetrical, with a second thumb on the opposing side to provide a sense of balance. The hand is usually pointing downward. 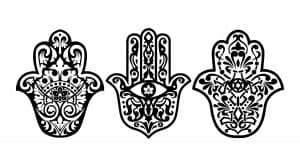 Now that you know what is a hamsa hand, it’s time to dive into its origins. This special symbol has its origins rooted in the ancient Middle East as an amulet and fertility symbol. Nobody knows for sure when it first appeared, adding mystique to an already unique symbol. Archeologists have found evidence of it as being used by the ancient Phoenicians as a protective symbol connected to an ancient goddess. Throughout its history, the hamsa hand has been associated with a female being that protects from evil and bad luck.

References exist regarding Mohammed’s daughter Fatima, as well as Moses’ sister Miriam. These references indicate that the hamsa hand has been very significant for both Jews and Muslims. A 14th-century Islamic fortress located in Spain has one of the earliest depictions of this symbol, located on the Gate of Judgment.

The word ‘khamsa’ means ‘five’ in Arabic. It is associated with fending off evil. This can also refer to the Five Pillars of Island, one pillar for each finger of the hamsa. According to Islamic legend, the hand of Fatima transformed into a symbol of her faith after her husband returned hone with a different wife one day. She was so stunned that she dropped a ladle she was stirring soup with and continued to stir with her bare hand, not realizing she was burning her hand.

The word “hamsa” is also called “hamesh” and means ‘five’ in either spelling. The number five has significant symbolic meaning in both Jewish and Islamic traditions. As mentioned earlier, the Five Pillars of Islam (for Sunnis) can be symbolized with each finger of the hamsa hand. Shi’ites see it as representing the Five People of the Cloak.

Five, called ‘hamesh’ in Hebrew, symbolizes the five books of the Torah. Also, it is associated with the fifth letter in Hebrew called “Heh” that represents a holy name for God. The Jewish religion also sees the hamsa hand as being a symbol for the Hand of God. Jews look at the five fingers of the hand as being reminders to use all five senses to give praise to God. The eye placed within the hand is seen as a talisman that protects the wearer against the evil eye.

Jewish, Muslim, and Christian scholars have been interpreting the hamsa hand as a fertility symbol, although it has more recently become a kabbalistic protection amulet and has great importance in Jewish art.

Finally, when it comes to the hamsa hand meaning Christianity also sees significance in it. It’s seen as a protective symbol, blocking any evil that may come one’s ways. Additionally, it is also seen as being connected to Mary, carrying her hands in a ‘fig’ pose.

In addition to all of these meanings, the hamsa hand is also seen as providing the wearer with happiness, good luck, and good health.

In recent years, the hamsa hand has become a symbol for peace in the Middle East. This is due to it being a uniting symbol that predates divisions that occurred among the peoples in the region. People who wear a hamsa hand necklace support peaceful resolution to the conflicts in the area. It is seen as a symbol that highlights similarities among Jews and Muslims, both genetically and religiously.

A hamsa hand necklace is the most common way of wearing this amulet. However, it is also commonly found on key chains, bracelets, home décor, and other kinds of jewelry. It has come to be seen as a symbol of protection that can easily be worn to receive the safety it provides.

Holysands proudly carries this ancient and powerful Jewish symbol in a variety of styles. The beautiful hamsa hand jewelry we have comes in stylish looks and styles, ensuring you will find something you like. Our collection features hamsa hand jewelry made out of gold and silver, and we even have antique-style pieces.

Whether you are looking for a hamsa hand necklace, bracelet, ring, or charm, we have a wide variety for you to choose from. Some even include brilliant blue Roman glass, crystals, and diamonds. Hamsa jewelry will make for a meaningful and special gift to a friend or loved one, be it for a housewarming, Bat Mitzvah, Hanukkah, birthday, or any other special occasion. 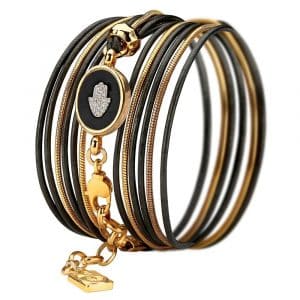 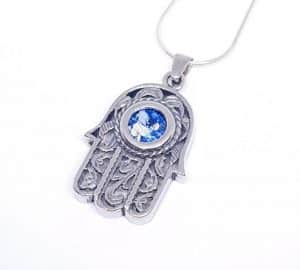 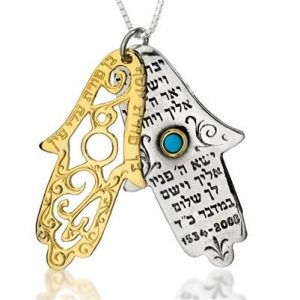 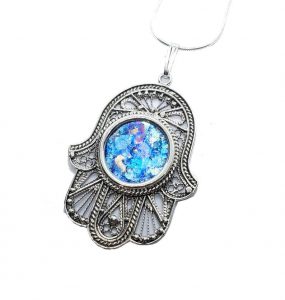 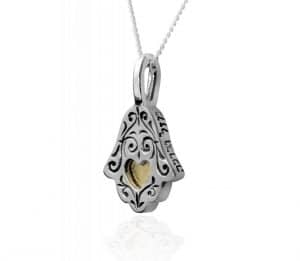 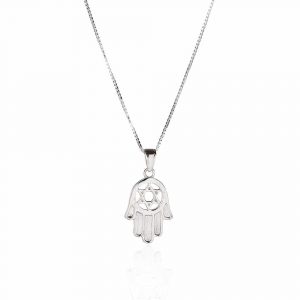