What are the 12 tribes of Israel?

Israel has a long history when it comes to its people and culture. The ancient Israelites split into 12 tribes based on the belief that they are the real descent of Jewish Grandfather Jacob. They are the sons of Jacob and all of them possess different characteristics who received a different blessing from him and Moses based on their nature. One can find the names of 12 tribes of Israel in the Bible that provides the valid points. The story of tribes is very interesting to read enabling a person to know more about them in detail.

The Birth of 12 Tribes

Jacob, the father of 12 tribes escaped from his own brother and went to Egypt where he took asylum in his uncle’s house. Rachel is the beautiful cousin of Jacob and he wanted to marry her. Laban, Rachel’s father, told that they have to wait for seven years for getting married and Jacob agreed on the same. But Laban had some plans and he insisted Jacob marry his older daughter named Leah after seven years.

She gave birth to 6 sons and a daughter. Meanwhile, Jacob married Rachel as his second wife and she got envious over Leah as she is not able to produce children. As a result, she decided to give full rightsto maidservant Bilhah who served as a concubine to Jacob.Bilhah had two sons whom Rachel named as Dan and Naphtali.

Rachel also allowed another maidservant Zillah to continue as a concubine to Jacob who had two sons Gad and Asher. She even prayed to God for giving birth to children, God granted her wish soon and she delivered his first son Joseph. The Jacob family went back to Israel later and she gave birth to second son Benjamin. But she died immediately after his birth.

There are 12 sons and one daughter in Jacob’s family who are born from one father and four mothers. Reuben, Judah, Issachar, Zebulun, Simeon, and Levi are the 6 sons born to Leah who is the first wife of Jacob and Dinah is her daughter.

The 12 tribes entered the land of Canaan after wandering on the desert for 40 years. Moses is the only leader who guided them to conquer the land and he allotted an individual territory to each tribe for administration purposes. 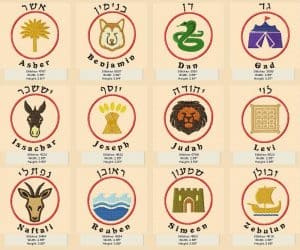 Christmas holiday season is right around the corner, and whether you’re an excellent gift-giver or not, it’s time to […]

The Significance and Meaning of the Kabbalah Tree of Life

The Kabbalah tree of life is a sacred symbol that has very esoteric and profound meaning attached to it. […]

It’s that time of the year! Hanukkah is rapidly approaching, which means it’s time to get those great gifts […]

What Is a Merkaba? The Meaning of the Ancient Merkaba Symbol

The merkaba, also known as the Star of David, is an ancient sacred geometry symbol that has […]

The Hamsa Hand Meaning – The Hand of God

In Israel, the hamsa hand is as prominent as the Star of David. It’s on necklaces, keychains, bracelets, and […]

How & Why Israel,  The Start-up Nation, Chooses to Rise Up for Centuries Long before the State of Israel […]